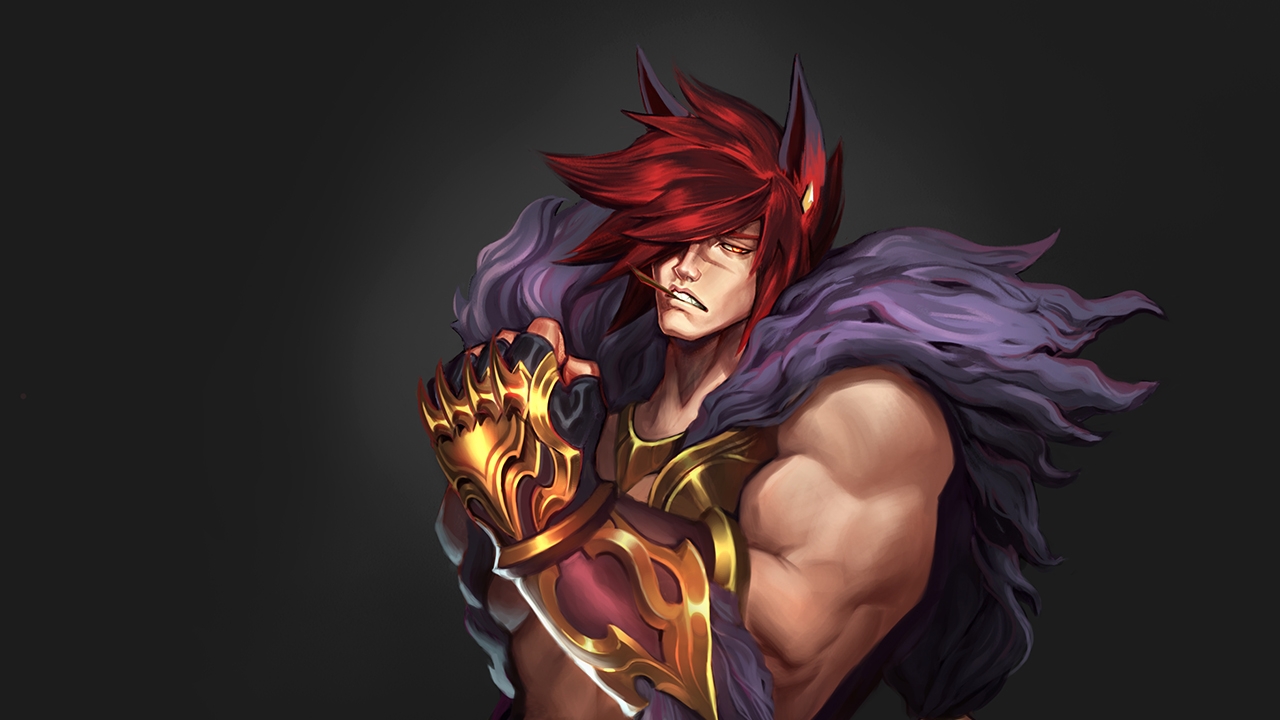 The guy your top laner told you not to worry about.

Compared to some of our recent champs, Sett’s a pretty straightforward champion to play—and so was his development process. “B-But Rito-sama, does this mean you don’t notice your half-breed bastard son as much as his edgier cousins like Kayn and Aphelios?” Nope, we love our chad vastaya a lot. And even though Sett snowballed into reality, he still required a ton of work.

Wipe that UwU from your face—here’s the story of League’s smokin’ hot new juggernaut.

Come on and Slam

“The last time we made a traditional juggernaut for top lane was Darius,” explains associate game designer Glenn “Riot Twin Enso” Anderson. “We talked about what we wanted to do for our next juggernaut and landed on an easy-to-learn kit with a broadly appealing character. Basically someone that a lot of players would like. And we just went from there.”

League didn’t have a champion who literally grabbed their opponents and threw them around like a ragdoll, and the team was excited to explore a grappler’s playstyle. Inspired by the idea of a flashy-move fighter who would literally 1v9 anyone, concept art lead Gem “Lonewingy” Lim started to draw.

Lonewingy created four early concepts for Sett. The first was a four-armed Targonian Aspect of Might. (All the better to grapple with, my dear.) The next was a Piltovan robot butler, which became a hit with the design team.

“He’s a proper butler robot guy,” laughs Lonewingy. “He’s this very preppy, dapper dude who can, you know, make a souffle and be gentle. But he’ll also punch you to death.”

The third scrapped design was a Darkin behemoth… or the chunky dinosaur, as the team lovingly nicknamed him.

And then there he was in all of his vastayan glory: Sett, the embodiment of a rough grappler. Mr. Kick-Your-Ass-And-Steal-Your-Girl. But there was one problem: The grappling part of his kit had some issues and needed to be reconsidered.

“There were some design issues with having a champion physically grab and move another champion elsewhere,” senior game designer Bryan “Riot Axes” explains. “It creates a lot of gameplay clarity problems, can be frustrating for players, and it’s a big tax on resources to animate all of those grappling abilities.”

In order to alleviate some of the issues with Sett’s grappling, Riot Axes refocused the kit on straight out brawling… with a twist.

Most teamfights are played front-to-back, with the exception of an assassin flanking to one-shot your carry. Juggernauts’ beefy builds and kits flourish in that style, and if you’re someone who enjoys a good ol’ front-to-back teamfight, Sett wants to know your location.

Sett laughs at standard teamfight positioning. He wants to absorb tons of damage so he can unleash his full power by grabbing that beefcake frontline and body slamming them into the squishies they’re supposed to protect. It’s where he’s best, and it’s the exact type of fight he wants.

But because Sett went from fully-fledged grappler to Punchy McPuncherboy, his four-armed silhouette no longer made as much sense.

Wolverine vs. Honey Badger, Who Would Win?

“Now that Sett no longer grappled and instead relied more on punching, I needed to rethink his character design,” explains Lonewingy. This meant it was back to the drawing board for League’s newest husbando.

The team decided to go with a more standard two-armed design (perfect for haymakers), but they soon realized there might be a new issue: Sett just looked like some random guy, and that wouldn’t do for Ionia’s very own two punch man. 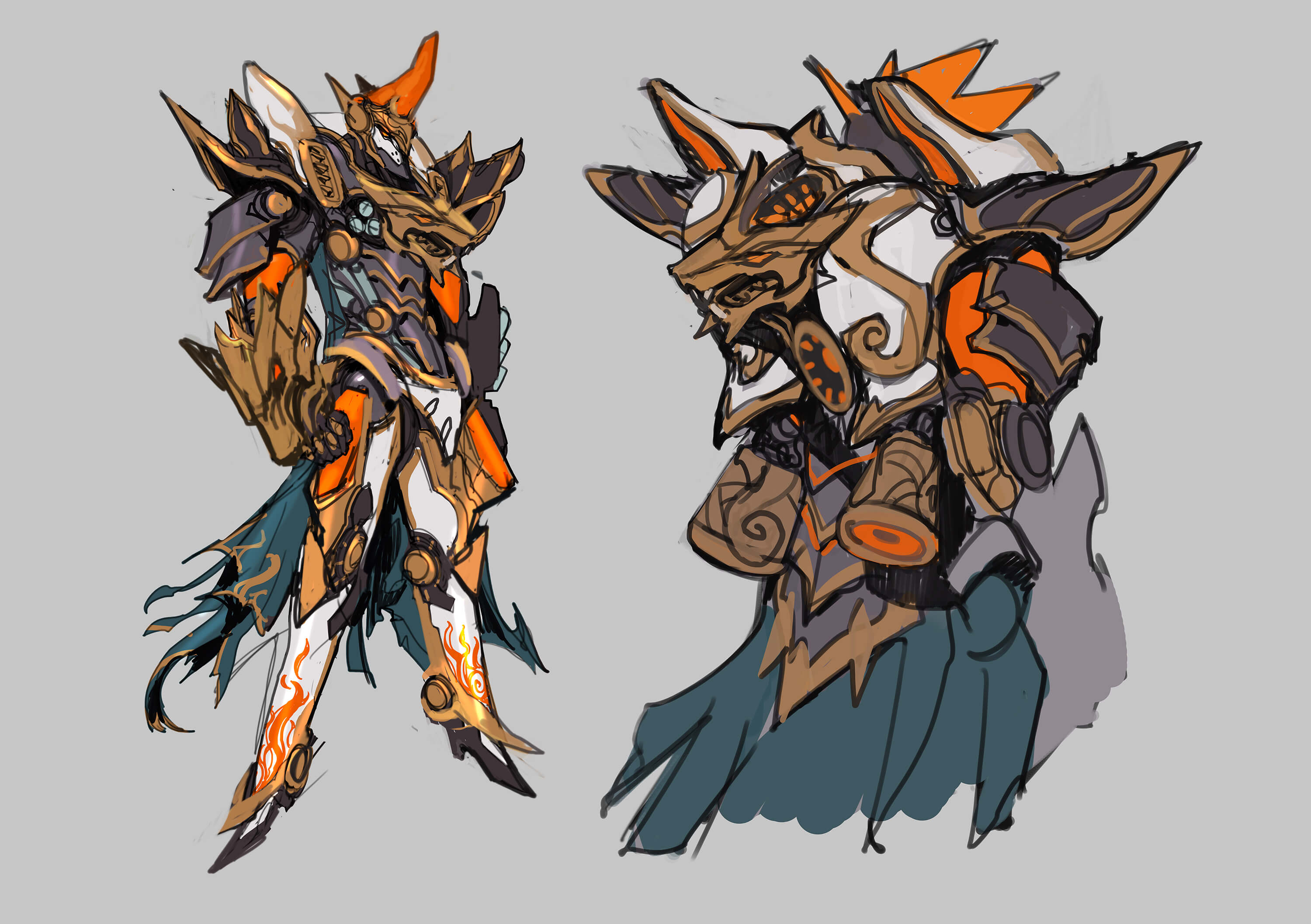 “Whenever we design a new champion we want them to have a unique silhouette or something that can carry over to skins so players know exactly who they’re looking at,” Lonewingy shares. “So we started exploring different types of fist weapons to give him something we could anchor to when we make skins.”

As a punchy boi, he needed something that’d feel intuitive to that style of combat, so they gave Sett a fist weapon. Which led the team to the obvious… wolverines and honey badgers.

“Vastaya are traditionally tied to animals. Xayah and Rakan are birds, Nami is a fish,” explains Lonewingy. “I wanted Sett’s brass knuckle to stylistically feel like his signature animal. I just didn’t know what animal that was yet, so I started to do some research.”

“According to the many ‘wolverine vs honey badger: who would win’ YouTube videos I watched, wolverines have a slight advantage when attacking,” laughs Longwingy. 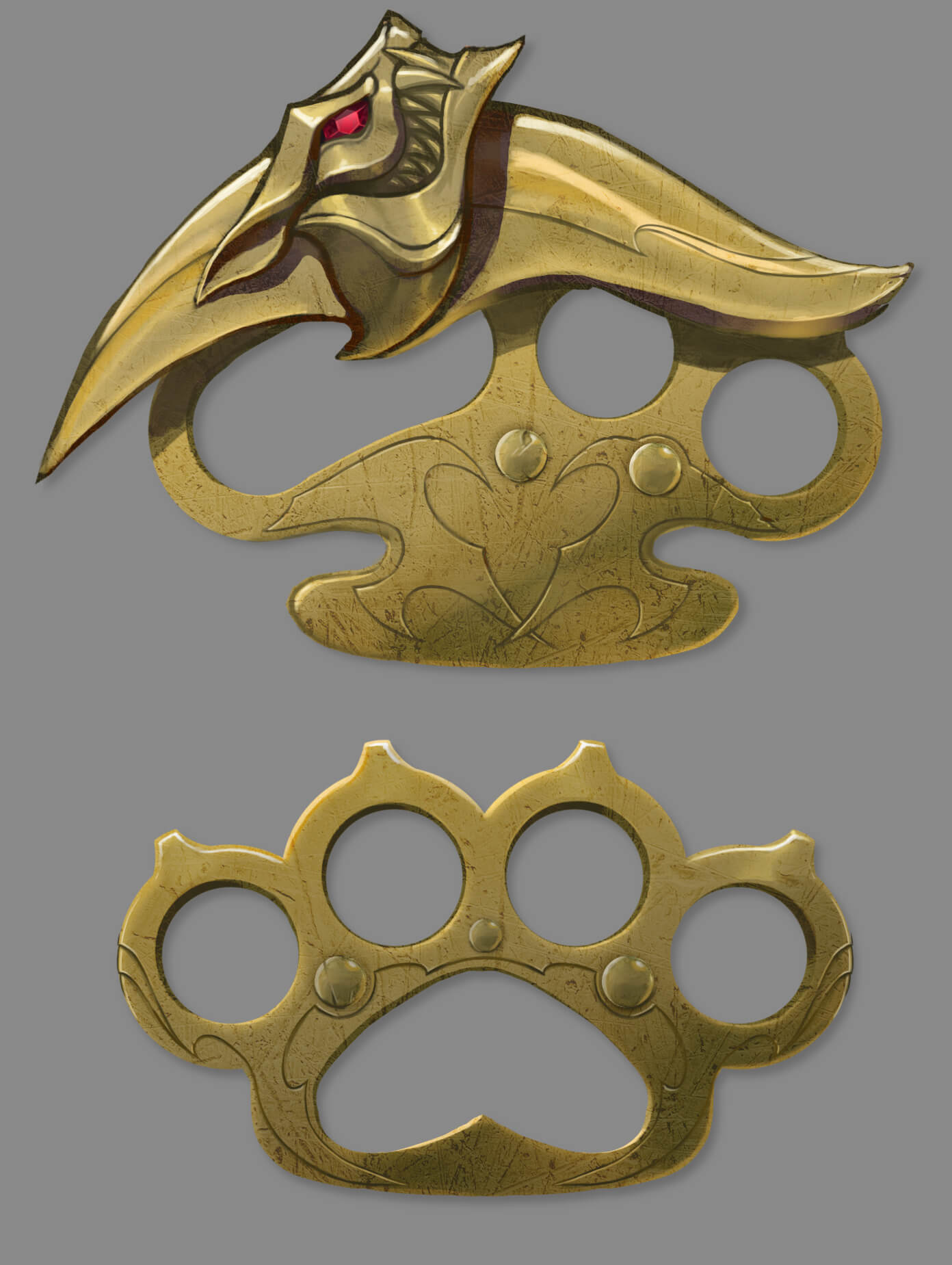 “Honey badgers definitely have more defensive stats. We ended up going with the wolverine because Sett is a fighter and not a protector. But it was really close between the two!”

“Riot Axes and Riot Twin Enso had created this champion who throws everything into every one of his punches, and Lonewingy drew this badass-looking guy, so I needed to start thinking about his story,” says senior writer John “JohnODyin” O’Bryan. “Because Sett had these big, visceral fighting moves and a tough look, it didn’t make sense for him to be a refined, dainty, upper cruster.” 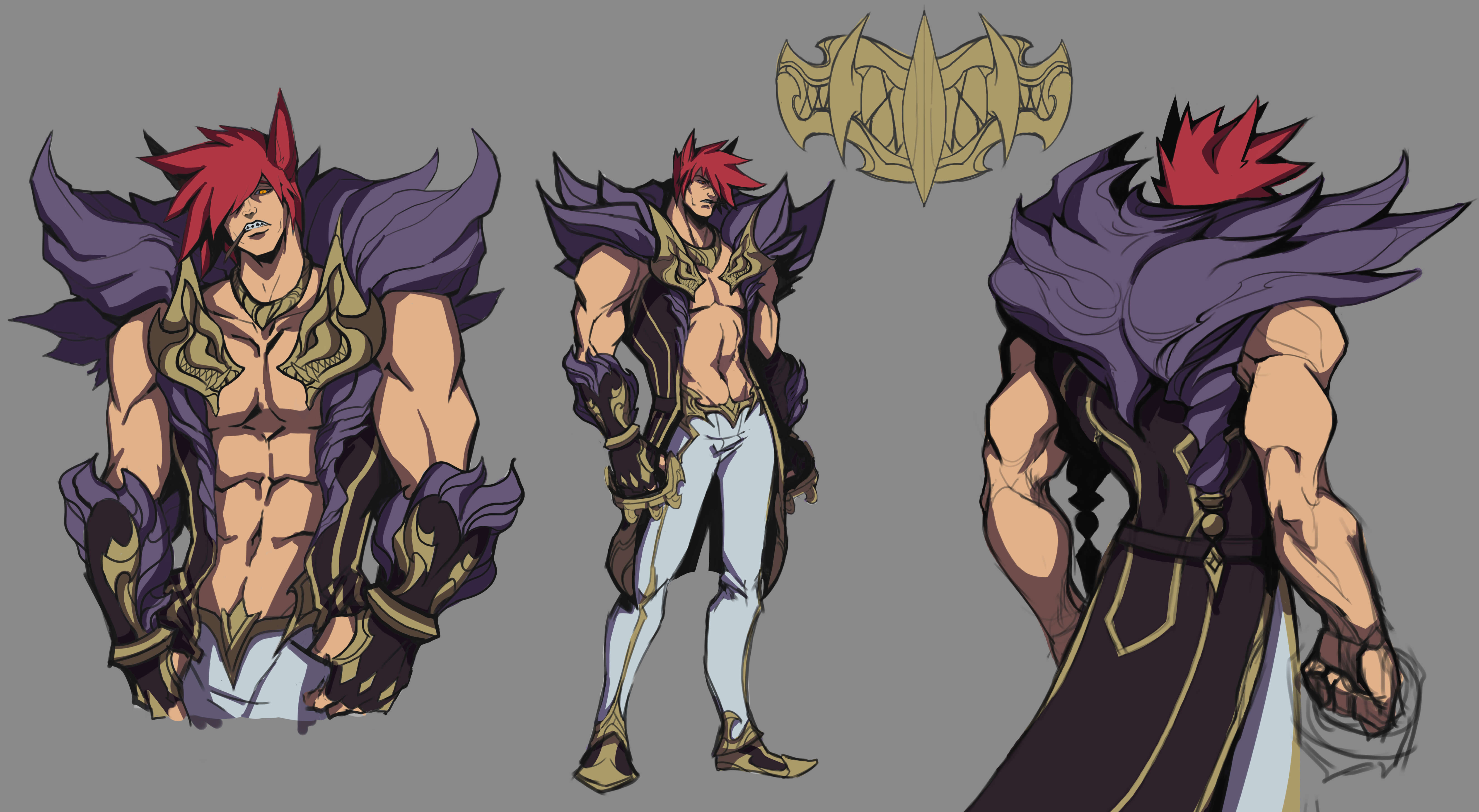 Ryan “Reav3” Mireles, Lead Producer of Champions Team, had a suggestion: What if Sett was a crime boss? With that idea, his story basically wrote itself. And Sett’s vastayan heritage gave the team the perfect chance to take a deeper look at Ionia, peeking directly into its seedy criminal underbelly.

“Ionia had been a world of exacts and extremes before Sett,” explains Lonewingy. “Zed’s evil, and Karma and Irelia are good. We didn’t have an Ionian champion who was just… grey.”

That led the team down the track of discovering what Ionia’s “grey” was. 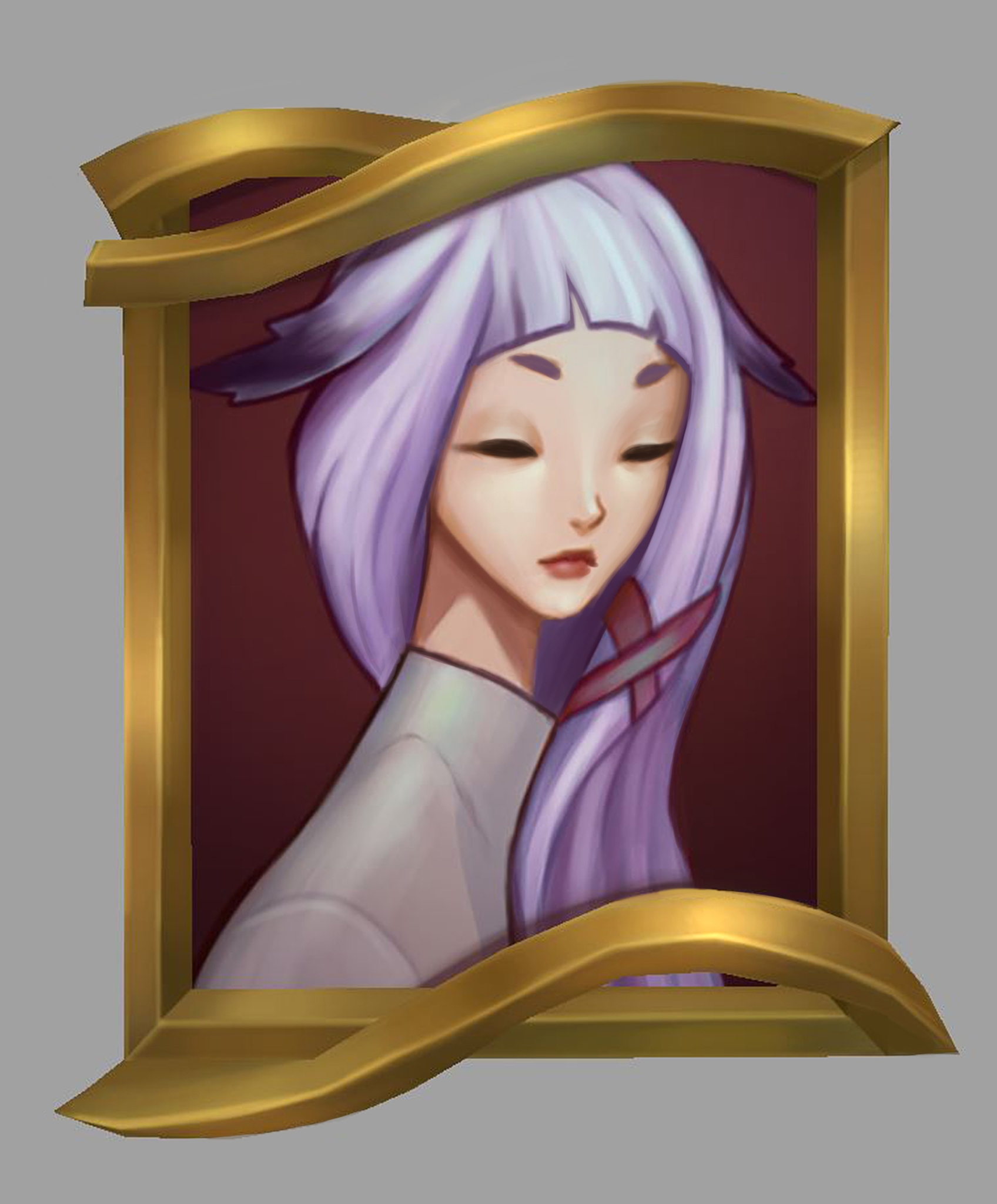 “Pit fighting really appealed to us,” says JohnODyin. “It exemplifies how Noxian culture has influenced Ionia, and gave them an outlet for violence. Sett’s kinda the product of that.”

But when Sett’s father left to seek bigger and better fighting pits across Runeterra, Sett and his mother’s lives changed. They were cast out of their tribe and forced to live among the humans who were… less than welcoming of an outcast vastaya and her large half-breed son. It was this hatred that shaped his uncaring personality.

And just like that, the jacked juggernaut was complete. He had two arms, no tail, and hair that’d make any anime villain jealous; a ma he loves; a kit filled with flashy wrestling moves; and daddy issues. He was perfect.

“For a long time Reav3 kept calling Sett, Seth,” laughs Lonewingy. “We managed to convince him it was too real world and went with Sett instead.”

… But even though his story was already written, the team couldn’t help but wonder what Sett’d be like if his father hadn’t left.

“He’d probably be a good boy going to college and finishing a degree so he could support his mom,” says Lonewingy.

“But don’t you think he’d go check out the pits anyway?” JohnODyin interjects. “Although he probably wouldn’t have had the desire to fight… ”

“Yeah, he picked up that path because of the hard life he lived with his mom,” agrees Riot Twin Enso.

“I guess I don’t really know where he’d be,” admits JohnODyin. “ But I do know he wouldn’t be Sett anymore—that’s for sure.”