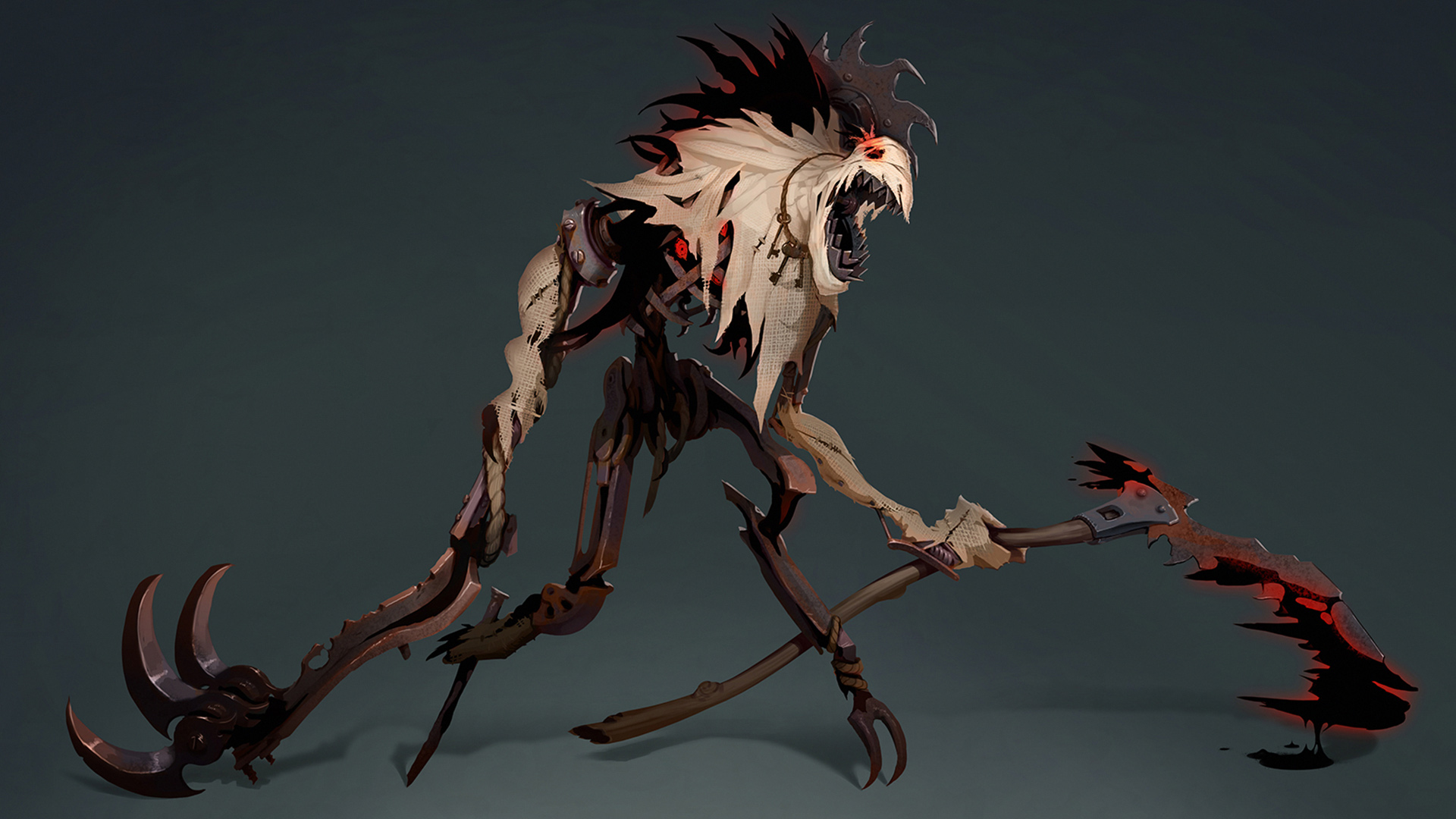 Crowstorms, unsettling twitches, and a caged demon. It’s coming for you.

Hey all, with the Player Choice Fiddlesticks VGU now in full production, we thought it’d be a good time to do a deep dive into our current progress. The team has some truly horrifying stuff planned for its release a little later this year, so this blog might not be for the faint of heart. We’ll be getting really nitty-gritty with some of Fiddle’s work-in-progress animations, VFX, modeling, and more, so consider this your final warning: spoilers, spooky stuff, and dense info lie ahead.

In case you missed the previous posts, our goal with updating Fiddlesticks is to transform it into the most terrifying champion in League of Legends.

As far as gameplay goes, we want Fiddle to be the iconic ambush champion, with a kit that’s centered around the concept of fear. This goes deeper than just a point-click status effect, which is staying on the kit. But beyond that, we’re giving Fiddle new mechanics that are built around its iconic Crowstorm. This includes giving Fiddlesticks more ways to stay hidden and find—or create—opportunities to ambush enemies. When a player succeeds at executing the perfect jump scare, we want to also make sure they’re in a powerful position to win the fight.

Experienced Fiddlesticks players will wreak mental havoc on their victims as they question what is real and what is a terrifying effigy.

Proxy idle animation from the previous dev blog—new versions are below!

During early story development, we brainstormed where the “new” Fiddlesticks could fall and what faction or race it might fill. Fiddle doesn’t really look like anything else in the game, so it could hypothetically be placed almost anywhere. And there’s that name: Fiddlesticks. A necromancer probably wouldn’t call their bloodthirsty new creation Fiddlesticks, nor would a warlock read from the grimoire of Dread Lord Fiddle In The Middle.

“Fiddlesticks” is a name a child would coin; something you might invoke around a campfire to scare your friends.

When we look at truly ancient champions like Ornn or Tahm Kench, they have hundreds or even thousands of origin stories and tales surrounding them. Fiddlesticks could easily fit in among them, having preyed on mankind for godless ages, so it would make sense that there would be nursery rhymes and storybook fables and old wive’s tales about a living scarecrow. Monster? Harvest deity? Eldritch artifact, controlled by some other person or creature? Instead of settling on one, Fiddle could invoke them all, an ancient malevolence with unclear origins, gone from the world long enough for warnings to become stories, stories to become myths, and myths to become simple children’s tales… until now.

As an utterly inhuman entity (regardless of what its true origins are), Fiddle lacks internal organs, a brain to think, or vocal chords to form sentences. Any type of voice it might have wouldn’t sound like a person, but rather a projection: Just as a scarecrow is the crude facsimile of a human being, its voice could be a crude mimicry of people it has come across/killed. We’re still super excited about this direction, and it’s something we want to implement for its VO. 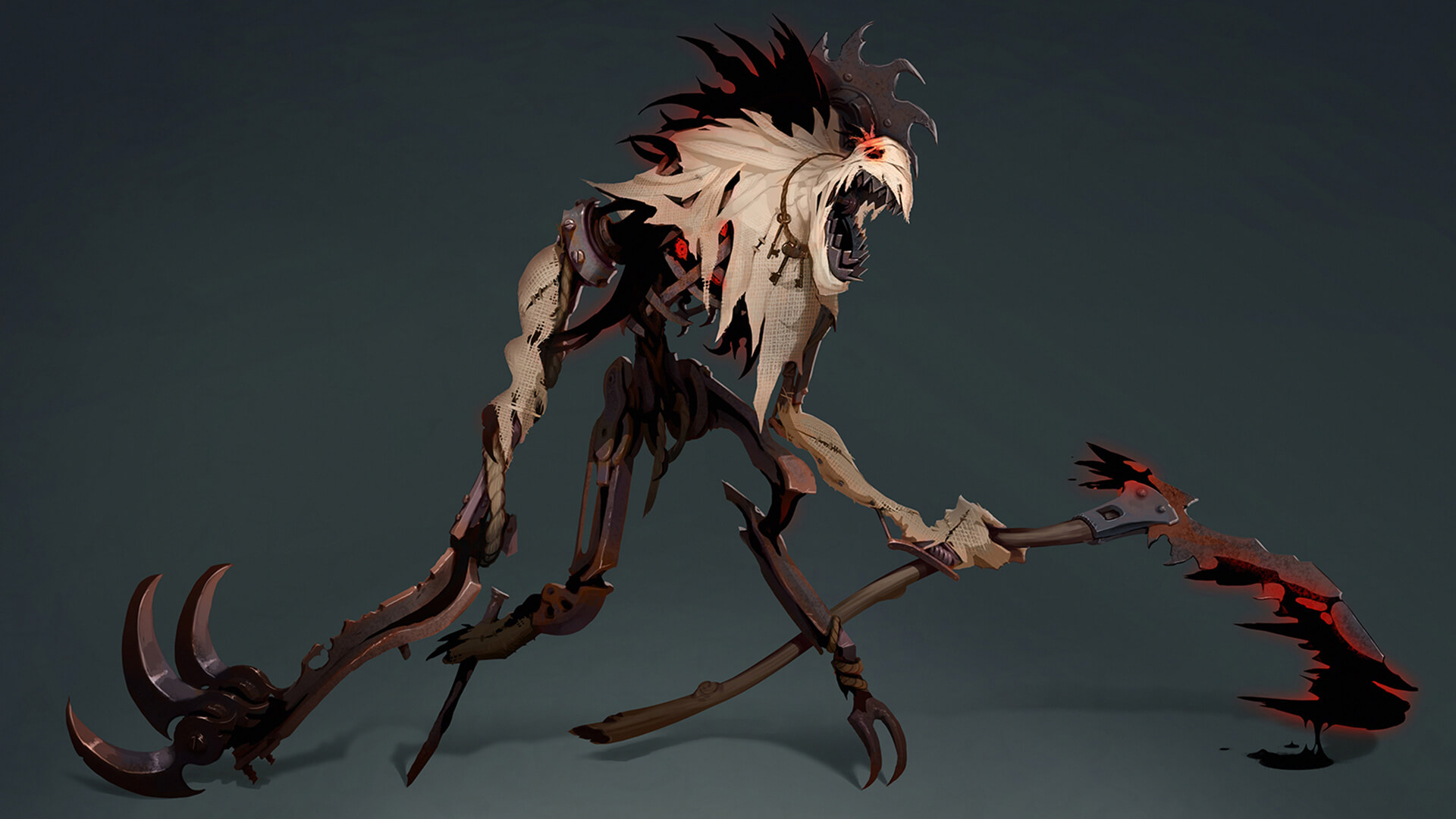 And as for visuals… Well, Fiddlesticks is a demon who feeds on fear, so we wanted to create something that’d incite terror in those who stumble upon it in the dark.

Now for the new stuff! Let’s jump into how the Fiddlesticks team transformed the concept art into something playable in game. Keep in mind that all work shown below is still very work in progress!

Jason “00Y00” Namgung, Character Artist: Modeling a character is two easy steps, you start with a sphere and then… final product. EZPZ.

On a more serious note, jumping into the Fiddle project, I was given an in-progress concept, and we had questions that needed answering. To name a few: How does its silhouette read in-game? How should it move? Are there any elements on the model that don’t work? How are the proportions of its body parts? To find those answers, I started out with creating a really quick and dirty proxy model just to get it into the game. 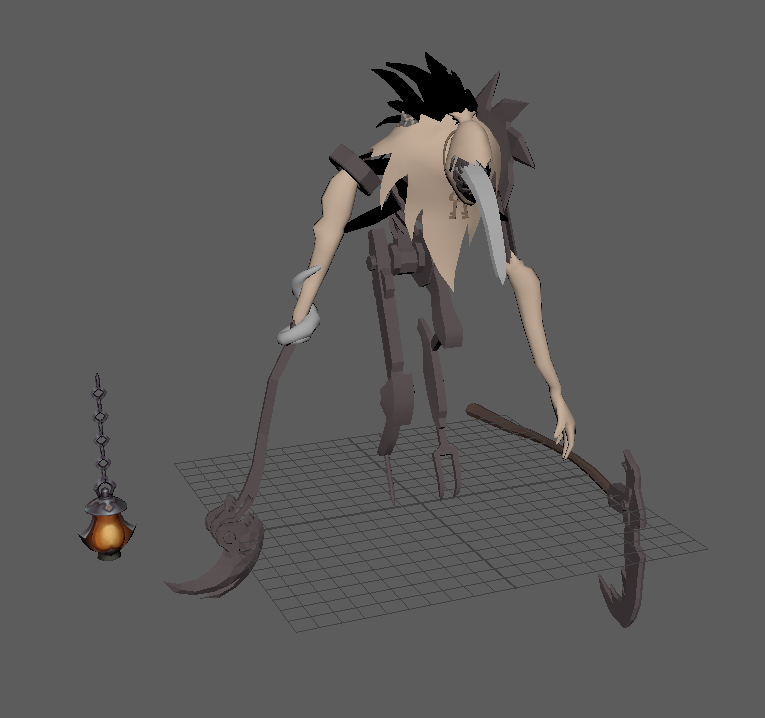 Once we finished all our testing and experimentation during pre-production, we moved into the production phase and really started building out the final high-poly model. A high-poly model is a higher polygon density model that we can digitally sculpt on (feels very similar to clay). I started replacing all the super simple, basic geometry pieces with the more complex mechanical pieces that Fiddle is made out of. This is the part where 3d artists normally go crazy on tiny detailing, but for League, it’s actually better for us to do really clean and simple sculpt with only big- and medium-detail shapes. 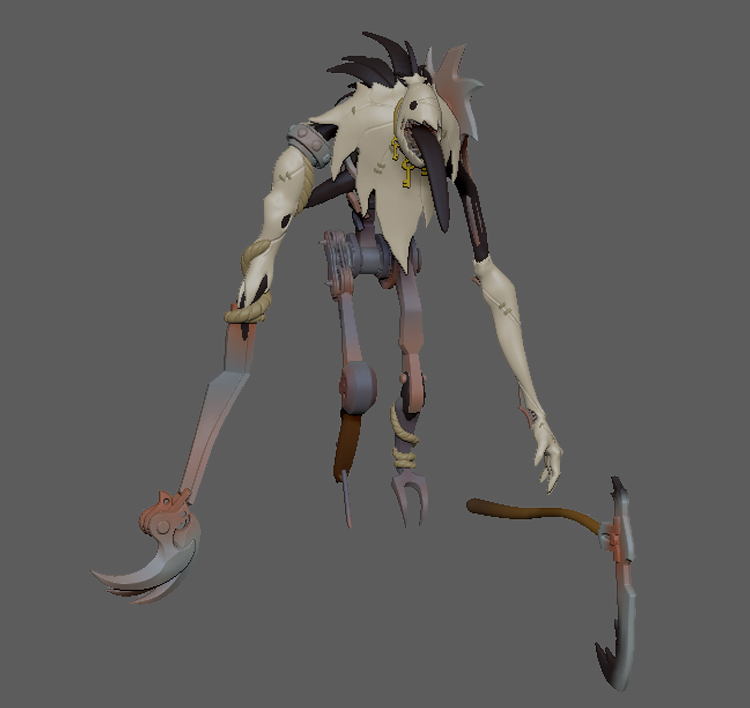 Once Fiddle’s high-poly model was finished, I went back to the refined proxy as the base for the final in-game model, just to save on time and sanity… I mean, efficiency. I come from a sculpting background and have less experience in painting, so rather than starting off from scratch, I used multiple maps baked from of the high-poly model such as the Normal, Ambient Occlusion, Curvature, and more to push the character’s textures further along. Then I throw it into a painting program and begin the “real” work of getting it to look good in League.

Just sit and paint, paint, and paint some more ’til it starts looking better. Still a work in progress! 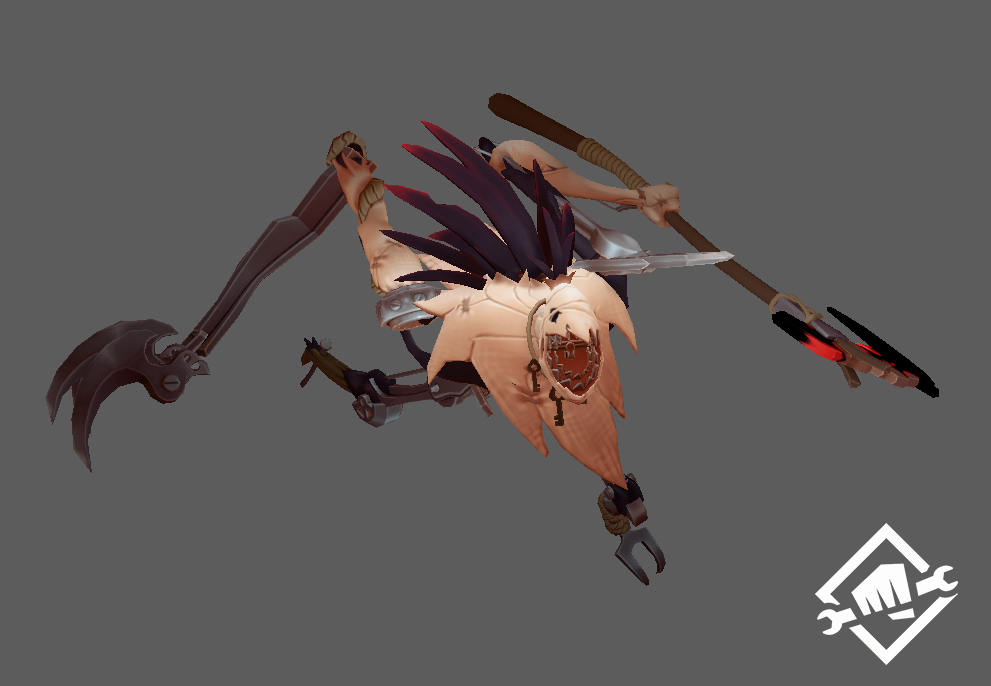 Coming to a nightmare near you.

Dawon “Riot WONY” Lee, Technical Artist: As a tech artist, I make the rig, which is comprised of bones and controllers in the model—the stuff that enables animators to move around specific parts of the model and bring the character to life.

Normally, when I set up champions, I consider how the character moves naturally. For example, Yuumi’s face rig can make natural and cute facial expressions, and Senna’s ghost cloak setup flows in a natural way. However, developing Fiddlesticks’ rig was different. When we started to set up Fiddlesticks, who’s basically a puppet, my goal was to create a setup that supports both unnatural and natural movements that feel similar to a demon or ghost.

The animator suggested putting an unnatural head shake into the animation when Fiddlesticks moves. I thought it was a really cool idea so I added a rig element that we call “jiggle” that helps animators create naturally flowing animation along a chain of joints. We usually use it for parts such as capes and tails. We haven’t used this function on champions’ head and jaw, so I wasn’t sure if it would work successfully. However, the results were exactly the unnatural head and jaw movements we wanted, making Fiddlesticks look eerie.

One of the biggest changes in the new concept of Fiddlesticks is a long right arm with big sharp claws to accentuate its spookiness. The animator wanted to create a walk animation to highlight its terrifying right arm where Fiddlesticks drags its sharp claws on the ground as it walks toward the enemy. Imagine in a horror movie, the enemy dragging his bloody weapon to the ground and walking toward the main character… super spooky.

I wanted to find the best way to make its arm look like a huge weapon and move in the same direction of its body, but to also make it look creepy and unnatural. A function called “Dragon Turn Tech” was set up on its right arm to make the arm follow its body naturally while also adding a creepy element to the movement. It may seem to be a minor change in animation, but it has a major impact and makes the animation look more realistic in game.

Bringing an Inanimate Object to Life

Luke “LukeHop” Hu, Animator: When I first saw its character design, I knew that animating Fiddlesticks wouldn’t be easy. Firstly, we need to figure out its character. Fiddlesticks is a mysterious ancient demon living in the body of a scarecrow. It’s a dangerous predator, so its poses and movements need to look a bit intimidating. At the same time, its body proportion is weird. Its right arm is long and heavy, and its legs are very slim and weak (especially with the little nail/fork feet), so its movements need to be a little unnatural and lack stability.

Another important thing I always kept in my mind was that Fiddle’s brain isn’t in its head, but in a cage in its chest. So its head can be treated as a decoration, since what’s really doing the “thinking” is the demon living inside the cage. This demon has no substance. But when it’s eager to hunt, you’ll see it try to break through the cage and reach its prey with two demon arms.

The concept of a scarecrow is also an important thing for Fiddlesticks, so you’ll often see Fiddle’s iconic “T-pose” during its idle, complete with a lantern swinging animation.

Jason “Riot Lanky Tree” Chisolm, VFX Artist: Green is oftentimes not a very terrifying color unless you’re from the Shadow Isles (then it’s horrifying). Fiddlesticks, however, isn’t a shadowy entity from a far-off island. It’s a demonic entity ready to appear when you least expect it, and Fiddle needed a new color palette to reinforce this. As some players noticed when we revealed the new concept, there’s a new color palette made up of mostly reds and blacks on the scythe, and this carries over into the VFX. We went with red and black to make the demonic origin even more apparent, but color is only one of the many aspects that make up a champion’s VFX.

After the colors were decided, it was time to focus on the shapes and textures that would be utilized throughout the kit. Shape plays a huge role in creating iconic VFX for champions. To contrast Fiddle’s newer, more mechanical appearance and to allude more to the demonic entity within, I wanted to create a mix of ambiguous organic shapes, soft wispy shapes, and sharp dangerous ones.

Even with these changes, there were still core parts of Fiddlesticks’ previous identity we wanted to keep and enhance. Let’s take a look at Crowstorm. Crowstorm is a pretty unique ability—it takes up a lot of screen space, lasts for a while, moves with Fiddlesticks, and Fiddle can cast other abilities while it’s active. Plus, the name “Crowstorm” conjures up an image of an intense flurry of feathers, dark wind, and demonic energy. All in all, creating the VFX for Crowstorm is a careful balancing act to make it easily readable without downplaying the importance of it in a fight.

I knew I would need a solid plan going into Crowstorm’s update in order to fully deliver on the fantasy of this ability. I focused on what I wanted players to feel, both for the channel and for what happens once Fiddlesticks blinks into the fight looking for kills. For the channel, I really wanted to push the sense of the demon having an uncontrollable urge to kill to the point where it’s literally bursting out of Fiddlesticks. Once channeled, this ability needs to grab attention since it’s a new player entering the fight often from out of vision. In order to do this, I played up a lot of the initial blink with thematic-reinforcing elements such as demonic script, bursts of dark smoke, a bit of distortion, and of course lots of crows.

What’s Next for Champions?

We’re also talking about the Volibear VGU and some upcoming champions in today’s Champion Roadmap video. We’ll share more details about Volibear in a dev blog later this year.

We can’t wait to finally get the Fiddlesticks update into your hands. In the meantime, we’ll leave you with one last thing from development… 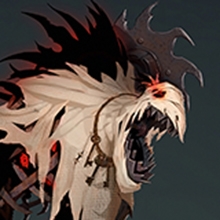