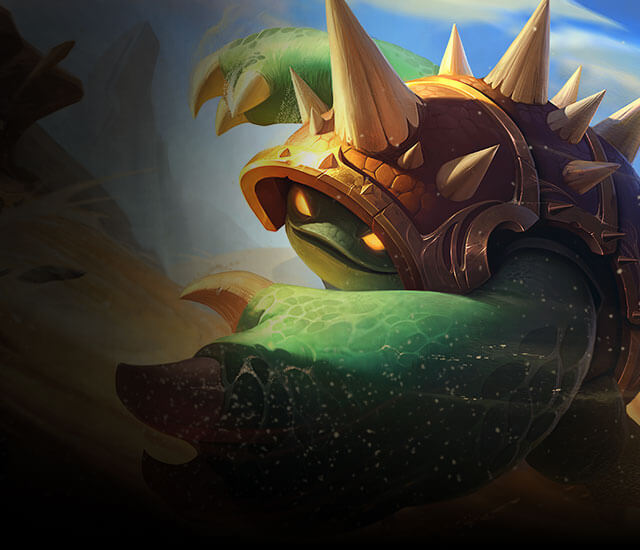 Idolized by many, dismissed by some, mystifying to all, the curious being, Rammus, is an enigma. Protected by a spiked shell, Rammus inspires increasingly disparate theories on his origin wherever he goes - from demigod, to sacred oracle, to a mere beast transformed by magic. Whatever the truth may be, Rammus keeps his own counsel and stops for no one as he roams the desert.

Some believe Rammus is an Ascended being, an ancient god amongst men who rolls to Shurima’s aid as an armored guardian in its times of need. Superstitious folk swear he is a harbinger of change, appearing when the land is on the verge of a great shift in power. Others speculate he is the last of a dying species that roamed the land before the Rune Wars sundered the desert with uncontrolled magic.

With so many rumors of great power, magic, and mystery surrounding him, Rammus compels many Shurimans to seek his wisdom. Soothsayers, priests, and deranged lunatics alike claim to know where Rammus dwells, but the Armordillo has proved elusive. Despite this, proof of his presence predates living memory, with crumbling mosaics depicting his image on the most ancient walls of Shuriman ruins. His likeness adorns colossal stone monuments made in the early days of Ascension, leading some to believe he is no less than an immortal demigod. Skeptics often point to a simpler explanation: that Rammus is just one of many such creatures.

It is said that he appears only to worthy pilgrims in great need of his aid, and those blessed by his presence experience great turning points. After the Armordillo rescued the heir to a vast kingdom from a terrible fire, the man renounced his position to become a goat farmer. An elderly mason was inspired by a profound, yet brief conversation with Rammus, and constructed an enormous marketplace which became the bustling heart of Nashramae.

Knowing Rammus’s guidance can pave an enlightened path, devout believers perform elaborate rituals designed to attract the favor of their deity. Disciples of the cult devoted to Rammus demonstrate their unwavering faith in a yearly ceremony by imitating his famous roll and somersaulting through the city in droves. Every year, thousands of Shurimans trek through the most treacherous and remote corners of the desert on a quest to find Rammus, for many teachings indicate he will answer a single question of those he finds deserving, if they are able to find him. Knowing his enthusiasm for desert treats, the pilgrims arm themselves with offerings thought to attract his blessing, packing their mules with flasks of sweet goat’s milk, chests filled with colonies of ants sealed in wax, and jars of honeycombs. Many never return from the deep desert, and fewer still with stories of the demigod, though travelers describe waking to find their packs mysteriously emptied of all edible provisions.

Whether he is truly a wise oracle, Ascended deity, or a mighty beast, Rammus is known for his miraculous feats of endurance. He entered the impenetrable Fortress of Siram, an imposing bastion designed by a crazed sorcerer. The structure was said to contain untold magical horrors - fearsome beasts mutated beyond recognition, corridors wreathed in flames, impenetrable tunnels guarded by shadow demons. Not an hour had passed when the enormous fortress collapsed in a plume of dust, and Rammus was seen rolling away. None knew why Rammus entered the darkened gate, nor what secrets he learned within the basalt walls of the fortress. In the year of the great flood he crossed the vast lake of Imalli in just two days, and dug many miles deep to destroy a giant anthill and kill its queen, whose daughters had devastated the nearby farmland.

Sometimes he appears as a benevolent hero. When invading Noxian warbands attacked a Northern Shuriman settlement, disparate tribes banded together to defend the territory beneath the Temple of the Ascended. They were no match for the invaders in size or skill, and the battle was all but lost when Rammus entered the fray. Each side was so shocked to see the elusive creature that fighting halted completely as they watched him roll between them. As Rammus passed the towering temple, the foundations of the building shook, and enormous stone blocks toppled onto the invading army, crushing many of its warriors. Now outnumbered, the army retreated to elated cheers from the Shurimans. While many swear Rammus saved the town out of love for Shurima, others argue he was merely defending the territory in which his favorite cactus flowers grew. At least one tribesman claims Rammus was simply sleeprolling and had no intention of taking down a temple.

Whatever the truth, stories of Rammus are treasured by the people of Shurima. Any Shuriman child can list a dozen theories on the question of his origin, half of which they likely invented on the spot. Tales of the Armordillo have only increased with the rise of Ancient Shurima, as they did just before its fall, giving way to a belief that his presence heralds darker times to come.

But how can such a benevolent, epicurean soul herald an age of destruction? Caravan North

Ojan’s knife whittled the edge of the ironwood into a soft curve. As an eight-year-old, he wasn’t the most practiced craftsman; his wood block was just starting to resemble something round and spiky.

His sister, Zyama, leaned down from her bunk and grimaced.

“What’s that? Rhoksha dung?” she said. “No one will want to buy that.”

“It’s not dung, it’s a great and fearsome god, with his armor and everything! And it won’t be for sale. It’s for luck.”

“We’re traders, little brother,” she said. “Everything here is for sale.”

The caravan clinked and clanged as it rolled over the dunes. Every space from floor to ceiling was packed tightly with jars of spices, leaving just enough room for the family’s narrow bunks.

“Something’s chasing us from the south!” Ojan’s mother shouted from outside. Ojan heard her whip crack, urging the camels to hurry their pace.

Zyama leaned out the window, staring through her most prized possession, an ornate spyglass.

“They’re Kmiros! I’ll ready the arrows,” she said. “They must be after your Rhoksha dung.”

Ojan replaced her at the window. Sure enough, hundreds of beetles the size of dogs swarmed over the dune behind them.

Zyama returned with a bow and quiver of colorful arrows. She fired, taking one beetle out, but the mass of insects charged on without pause.

“How many arrows do we have?” Ojan asked.

“About forty,” Zyama said, looking into the quiver. She frowned.

Their mother’s voice carried from the front. “We’ll have to outrun them. Hold on!”

Whips cracked once more and the caravan jolted forward, knocking Ojan to the floor.

Zyama loosed another arrow into the swarm, spearing two at once. The creatures fell, but plenty more took their place.

“Oil! In the left cabinet!” their mother shouted.

Ojan ducked away and returned with a flask of lamp oil and a wad of rags. He doused a piece of cloth before wrapping it around the tip of an arrow. He lit the bundle on fire and carefully handed it to Zyama, who blasted the flaming shot into a cluster of beetles. They burst into flames, screeching as they burned. Ojan grinned.

Together they bombarded the horde with flaming arrows, firing as fast as Ojan could wrap each arrowhead. The air smoked with burning chitin. The caravan accelerated, and the gap increased. They were nearly safe.

Ojan’s stomach dropped. The Kmiros spread glittering wings and rose to the skies as a unified black cloud.

Ojan flinched as a heavy thud shook the cabin from above. More followed, and the wooden slats groaned under the weight of the oversized insects.

“Hold on!” his mother shouted from the front as she veered them sharply left. Beetles tumbled from the roof, but Ojan heard a discordant scratching from above and knew more had landed.

Pincers broke through the layered beams in the ceiling and an enormous beetle tumbled into the caravan. Zyama drew her dagger and stabbed it, but her blade was unable to pierce its tough carapace. She pushed Ojan back and waved her blade before her, desperately trying to hold it at bay.

More Kmiros dropped through the smashed roof, all snapping jaws and clicking pincers. Ojan dove beneath his bunk, desperately kicking the insects as they clawed for him. He prised the round wooden figure from his pocket.

The caravan jolted as beetles landed on the roof. It pitched back and forth like a ship on a rough sea. Then the world tilted sideways as the caravan overturned completely, skidding in the sand.

Ojan shielded his face from tumbling objects as dust clouded his vision. He was flung against the wall, his ears ringing and head throbbing as the caravan swerved. After a moment of stillness, he felt a hand tug his arm as his mother dragged him from the rubble. He squinted in the blinding sunlight.

The family huddled in the wreckage of their caravan, coughing in the dusty air as the Kmiros circled. A beetle charged forward and Ojan’s mother stabbed it between its clicking jaws. She skewered another as it scrambled to bite her daughter, spilling rank yellow innards across the sand. A third beetle leapt from the top of the caravan and landed behind them. Zyama screamed as it seized her foot in its pincers.

The beetles froze abruptly, halting their attack. They hunkered low to the ground, antennas flexing. In the silence, Ojan heard a distant whirring. He watched the western horizon as a sand cloud rushed toward them in a fury of dust. The family brandished their weapons in readiness to fight this new threat.

A round armored shape exploded from the flurry of sand and smashed into the nearest beetle with terrible force, crushing it to pulp.

The shape barreled on, smashing beasts left and right. Though the insects snapped at the shape with their sharp pincers, it was unstoppable, and in a moment, no living Kmiros remained.

The dust began to settle once more, and Ojan glimpsed spiked armor jutting from the round shape ahead.

“Rammus!” Ojan shouted. He scrambled down the hill to meet his hero.

The creature’s shell was intricately patterned with spiral scales, and his claws were sharp as knives. He gnawed slowly on the hairy leg of a beetle, juice dripping from his mouth.

Their mother approached the Armordillo, bowing her head deeply.

He rolled to the fallen caravan and rummaged through the debris, emerging with Ojan’s wooden carving of the Armordillo. The likeness wasn’t perfect, but certainly discernible.

Rammus knelt down and bit the wooden figurine in two with a crunch. He turned and walked a few paces before spitting the pieces into the sand. Zyama stifled a laugh.

He tore a leg from another dead beetle and dragged it through the sand as he rolled away.

The family watched him disappear over the horizon.

Ojan ran after Rammus to retrieve the broken pieces of the statue. He pocketed them and bowed.